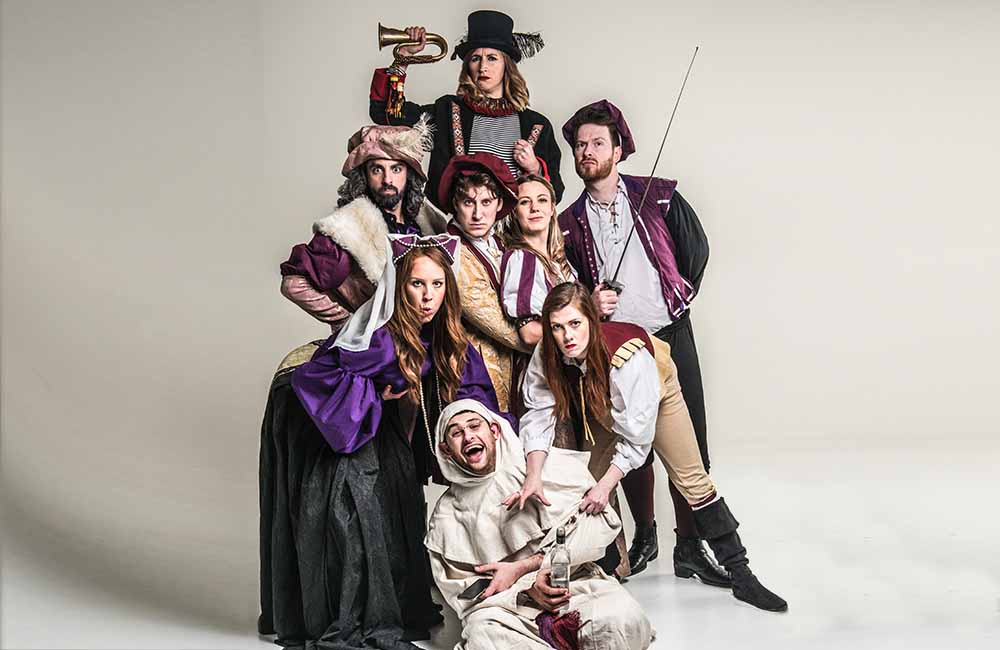 If you saunter along to the Leicester Square Theatre expecting traditional Shakespeare, you are in for a rude—a very rude—surprise. This ain’t your father’s Shakespeare. Oddly enough it is the kind of Shakespeare the Bard himself might enjoy. Enjoy—if he’d gone on a mad pub crawl beforehand, and decided to stop by the theatre to see the latest production of Romeo and Juliet. If well fortified beforehand, he’d enjoy the show—and probably not notice how the cast have changed the ending. And quite a few other things. But then, good times, fuelled with lots of alcohol, are what Sh*t-faced Shakespeare are all about. They know their business, and they know their audiences, well.

Sh*t-faced Shakespeare’s brand of Shakespeare (touring since 2010) “seeks to introduce a new generation of theatregoers to the works of the Bard by reviving the raucous, interactive and vibrant nature of Elizabethan theatre with a very modern twist.” This is one of the most accurate descriptions of a show I’ve ever seen in press materials put out by a company, and they win my admiration for that. It’s great to see such a young crowd turn out for Shakespeare in a comedy club setting. Veterans of the Sh*t-faced approach will know in advance the set up. To summarize: one of the company comes on stage as MC to announce that another member of the company has been chosen to be the drunk for the evening’s performance. Drinking heavily for several hours before the show, this performer will also be expected to drink more every time a bell or gong is struck by a member of audience. While performing Shakespeare.

On this particular evening, it was Juliet’s turn to take one for the team. But there’s not just drinking and slapstick involved here. There’s audience participation that involves acting as well. Short of a County Paris for this performance of Romeo and Juliet, a good sport sporting a “Slayer” tee shirt was selected to play the part of Juliet’s father-approved fiancé. Very appropriate. Out of this formula the cast of Sh*t-faced Shakespeare proceeds to build an entertainment that pays no attention to the tragedy of Romeo and Juliet. They just focus on the comedy instead. You didn’t know Romeo and Juliet was a comedy?

Seriously, kudos to the cast. David Ellis, Louise Lee, Jessica Brindle, Richard Hughes, Christopher Lane, John Mitton, Lucy Farrar and Stacey Norris are all seasoned soldiers of the Sh*t-faced scene, which includes knowing just how badly to mess up the best known speeches while maintaining eye contact with the audience most of the time. Amazingly enough, no one got hurt as the evening (and the drinking) progressed. These actors are tough, and experienced. It’s also impossible to know whether they have been drinking, which speaks well of their classical training. The programme reassuringly points out that company members are never expected to drink on consecutive nights, or more than four times a month. They consider themselves to be more temperate drinkers than the average West End actor.

In short, if you feel your friends need a bit more culture, and fewer nights at the pub, take them to a Sh*t-faced Shakespeare show. They will have a good time, and might not even notice that they are no longer at their local. And rest assured that the “real” Shakespeare’s reputation will survive, despite the “rough magic” dealt out by Sh*t-faced Shakespeare.

Previous Shit-Faced shows at this venue: