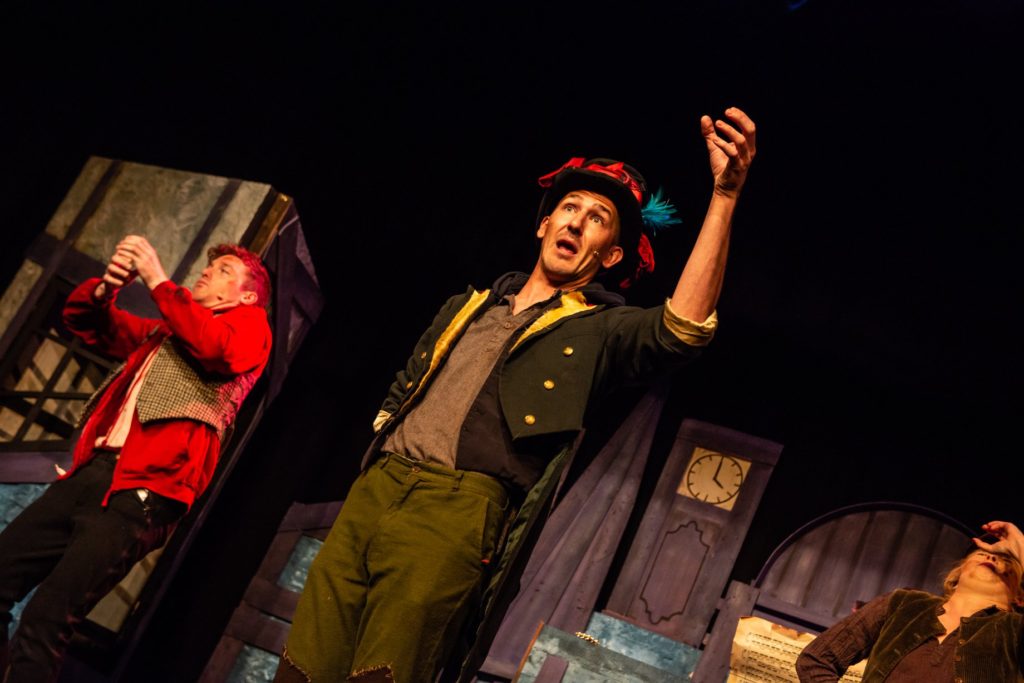 If you’re not familiar with Magnificent Bastard Productions’ Shit-Faced Showtime, the concept is simple: The company parodies a classic musical, and one cast member gets drunk before the show. They rotate which performer will be inebriated each night, and you don’t know ahead of time which character will be ‘shitfaced’.

The press night performance of Oliver with a Twist featured Oliver, played by Issy Wroe Wright, as an allegedly smashed orphan. However, while Wright may have had several drinks over the course of several hours prior to the performance (as the programme explains), it was obvious she was not drunk, let alone ‘shitfaced’. Whether due to health and safety laws, or the company not wanting to accept risk, the reality is a barely-tipsy performer acting drunk.

Unfortunately, Wright’s impression of being wasted is largely unconvincing. Her occasional missteps feel contrived, and a lot of her movement is obviously choreographed. What’s meant to be spontaneous comedy from ‘alcohol-inspired’ lines is either scripted, or improv that has nothing to do with being drunk. Oliver asks Dodger if they’re going to stay in an Airbnb, and if Mr Brownlow has done one of those internet DNA tests. The lines aren’t particularly funny, and it’s unclear how to interpret them. Are we meant to believe Wright is so hammered she doesn’t know she’s in a play?

Writer/director Katy Baker, who plays the MC, makes a big deal in her introductory speech about how the already ‘sloshed’ actor will have to drink during the performance. Two audience members are given instruments to play (once each) to signal Wright to drink. However, when the instruments are played, Baker pours beer into a pint glass, nowhere-near full, and Wright takes one (exactly one) tiny sip. Audience members who notice Wright isn’t drinking yell for her to do so. Wright gives a snarky response that she’s “going to drink it,” and then never does. She eventually disappears off stage and comes back empty-handed. Her second drink doesn’t go near her mouth, and is finally neglected on the stage. It’s baffling why this is part of the show. If the actor doesn’t drink, the gimmick only serves to remind the audience how fake the whole thing is.

The play’s comedy is built around the concept that a cast member is drunk. But because Wright is not drunk, and not very good at pretending to be, the show feels very artificial and flat. I’ve seen drunk theatre before, real drunk theatre, which is uproarious and wild. This is a highly produced, sterilised version. Its ‘West-End’ nature perhaps requires it to be that way, but the question then is why do it? The false advertising rankles. The audience are not children who don’t notice the actor flagrantly not-drinking in front of us. The play is much stronger when it is genuine parody: Bill Sikes (Hal Hillman) with his dog, and Nick Moore’s multi-roling. Pub theatres are the natural habitat of drunk performances; Shit-Faced Showtime proves they’re best left there.