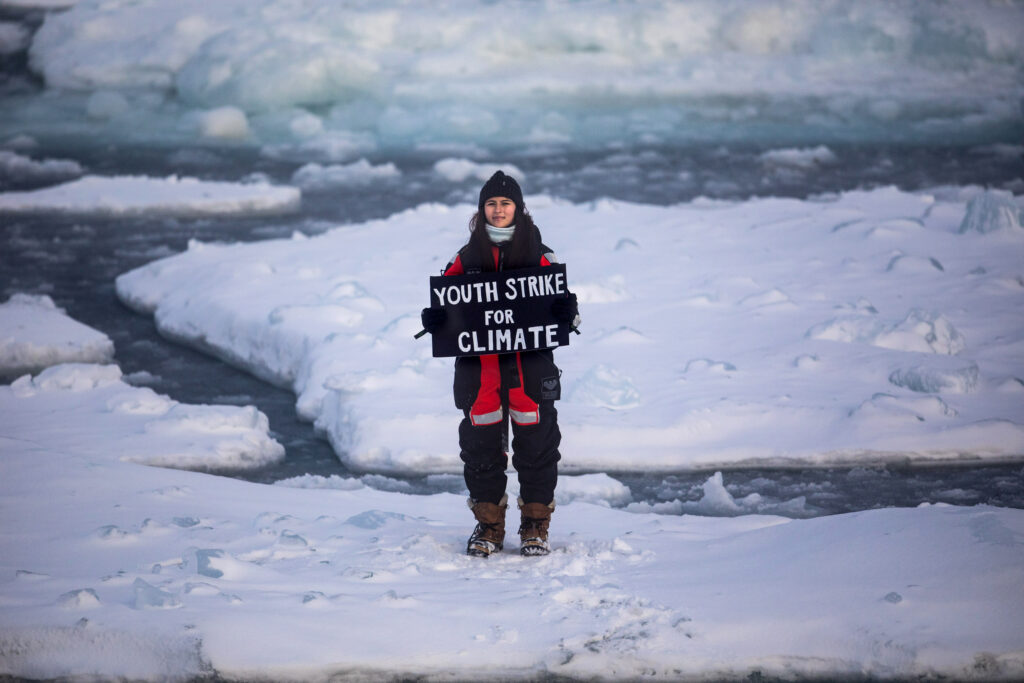 “By turns haunting, thought provoking, and an eloquent cry for what we should value in our lives”

As a piece of theatre, Magnetic North defies easy categorization. It is not what most of us would call theatre. But if one views the images and sounds of the Arctic presented in Magnetic North as part of the drama of climate change, then this piece is a transfiguration. It does not just change the eye, but the spirit. We see the consequences of our destructive way of modern life, not in our own terms, but through the perspective of the Inuit, the indigenous peoples of the Arctic.

Magnetic North is probably best described as a documentary. It is ninety minutes of a deep dive into the experience of the Inuit, as told by indigenous artists, through poetry, music and dance. For five thousand years in the forbidding Arctic landscapes, the Inuit have lived, and even thrived. But by the 1970s, they were among the first on Planet Earth to notice the destructive changes that were taking place as a result of what we now call as global warming. The melting ice was recognized by the Inuit as a threat to their way of life and the animals that they depend on, long before the rest of the world was talking about climate change. Magnetic North tells a powerful story about the Inuit that reveals their unique cosmological and ontological perspectives.

As a documentary, Magnetic North is full of images that are overly familiar—melting ice, lonely polar bears adrift on shrinking ice floes—and many that are not. We are introduced to shamans connecting with ancestral spirits through poetry and dance. Every performance is linked inextricably to the landscape, and its sounds. A dancer does not just dance, she climbs a cliff as part of her dance. A poet’s recitation is not just powerful words—it is an origin story about a goddess that cannot be named, and who has the power of life and death over the Inuit if they fail to be kind to one another. Magnetic North also includes the perspectives of Caitlyn Baikie and Mya-Rose Craig talking about the politics of climate change. These young climate activists frame the work of indigenous poets and dancers such as Elisabeth Heilmann Blind, Taqralik Partridge and Ishmael Angaluuk Hope, singers and musicians HIVSHU and VASSVIK, and photographer Kiliii Yuyan, not just as a race to document a disappearing way of life in the Arctic but by extension, a warning of the threat to all life on Earth.

By turns haunting, thought provoking, and an eloquent cry for what we should value in our lives, Magnetic North lingers in the memory even as it transforms. It shows us that through the perspective of the Arctic peoples, our perceptions of what our future could be, can change for the better. If we turn from destruction to respect for ancestors, and from the life of the solitary individual always taking, to sharing in community life, the Inuit say, we can turn things around. To the Inuit way of thinking, past, present and future have no meaning. Humans change, the cosmos does not. Respect the cosmos, be rooted in your community, and life is there.

As a documentary, Magnetic North does have a few weaknesses. It requires close attention not least because the closed captioning is not in sync — a difficulty for non Inuit speakers. There is so much packed into the ninety minutes that you realize that you are going to have to view it more than once. But perhaps that is the point.