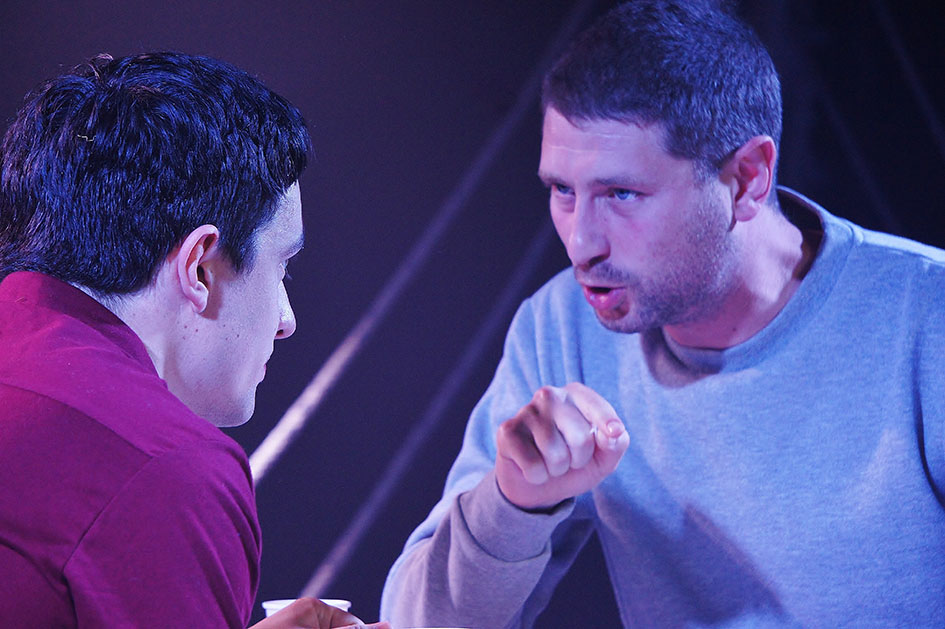 “amidst a mixed bag in terms of design and script, there lays a five-star performance from Cary Crankson”

At least on the face of it, or on any level I can fathom, Simon Stephens’ ‘Country Music’ is not about country music – much to the disappointment, I presume, of the front row who have all come prepared in their rhinestone cowboy hats. The set (Liam Shea), consisting of a raised platform with ropes pulling tight at its corners – a boxing ring? Or maybe a boat? – is another red herring. Whatever it’s meant to be, it’s unclear.

But beyond this initial confusion is a beautiful ninety minute performance. Cary Crankson plays the part of Jamie with such pain-staking nuance – the slight drawl, almost rhythmic; wide eyes and slow but purposeful movements conveying both psychopathic aggression and boyish sweetness – it’s near impossible to imagine him playing any other role. We follow him over a twenty year span, first as a thuggish eighteen-year-old running away from a violent crime, with fifteen-year-old Lynsey (Rebecca Stone), then ten years later, on his second stint in prison with visiting stepbrother Matty (Dario Coates), and finally as a repentant middle-aged man with a daughter he hardly knows (Frances Knight), before winding back twenty years to a sunny afternoon just before it all went irreversibly wrong.

Plot details are drip-fed organically via casual conversation, leaving the audience to work a little to put the pieces together, but the characters are so well developed, there is the impression that the performers know their parts far beyond what the script alone has given them. The dialogue is perfectly paced, allowing for believable patter – funny silences trying to chew through a sweet, accidentally talking over each other, strained small-talk when it’s clear so much more is going unsaid.

Creative lighting (Benny Goodman) and sound are used almost exclusively between scenes to denote a leap in years – Kid-A-style snippets pair with slowly pulsating yellow lighting, like an old movie projector. The abrupt lack of any distractions during the scenes, in comparison to these poetic passages of time, creates an honest starkness. There are no jazz hands, no light relief, except that which the characters themselves create – a small joke or two, eked out amidst moments of distress and frustration.

All of this added up, however, doesn’t quite make a full plot. Either it should have been a half hour shorter – a perfect tableau of a man’s life – or it needed a second half. There is no excess, and the audience is focussed throughout, but in short, Scott Le Crass’ direction sees a beautiful and heart-breaking portrayal of an unfinished story. That said, amidst a mixed bag in terms of design and script, there lays a five-star performance from Cary Crankson. Whilst his co-stars all fulfil their duties honourably, Crankson’s ability is masterful, taking this production from mediocre to a must-see. 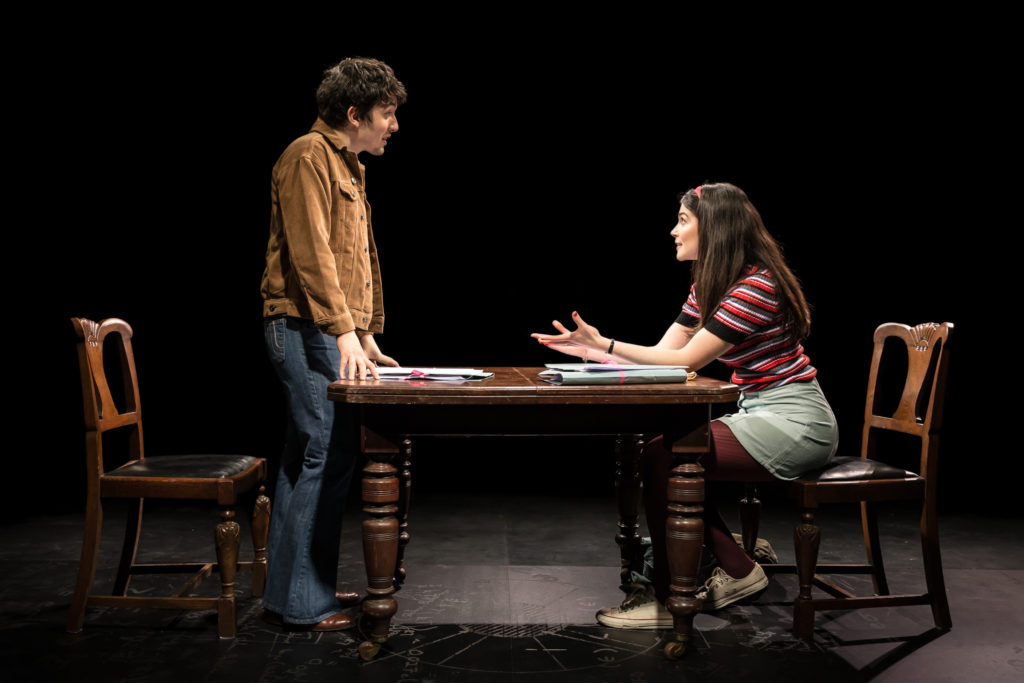 Just before sundown on Friday 19th June 1953, Julius and Ethel Rosenberg were sent to the electric chair in New York’s Sing Sing prison, accused of passing atomic secrets to the Soviet Union. Proclaiming themselves innocent, to the point of martyrdom, right up to their deaths, the couple were the first American citizens to be executed for espionage. That they were sacrificial lambs to McCarthyism is generally undisputed, but a further twist to the case was that it rested on the testimony of Ethel’s brother, who decades later told reporters that he lied to protect his own family.

With name changes for dramatic licence, their haunting true story is the basis of James Phillips’ “The Rubenstein Kiss”, which takes its title from the famous photograph of the Rosenberg’s kiss in the back of the prison van before their execution. The fictionalised version of the photograph hangs in an art gallery in the mid-seventies; where young law student Matthew (Dario Coates) meets, seemingly by chance, history teacher, Anna (Katie Eldred). From this, again seemingly, light-hearted vignette of the courting couple we are suddenly swept back to Esther and Jakob Rubenstein’s starkly furnished New York apartment in 1942.

What follows is an utterly compelling and thought provoking two hours of theatre. The essential beauty of Phillips’ play is that it perfectly combines the brutal political and social impact of the historical facts with a profound and deeply moving study of two connected families across two generations. The dialogue shoots straight to the heart of the characters’ innermost concerns, showering us with the impossible questions about morality, loyalty, betrayal, truth and patriotism at such a divisive time in America’s history.

The urgency of the writing is matched by an outstanding cast across the board. Henry Proffit and Ruby Bentall, as Jakob and Esther Rubenstein, both capture the unwavering passion and blind resolve of the doomed ideological couple; Bentall quite simply riveting in her final scenes under interrogation by Stephen Billington’s cool, chilling yet ambivalently sympathetic FBI agent, Paul Cranmer. Sean Rigby’s sensitive portrayal of the traitorous brother saves him from villainy and, like his fiancé, Rachel Lieberman (Eva-Jane Willis) shows that the choices we are forced to make are never clear cut. In fact, collectively the entire cast allow the audience the freedom to make their own conclusions.

Under Joe Harmston’s vital direction, the interlocking strands of the narrative, aided by Matthew Bugg’s swooping sound design, seamlessly cut between the forties and the seventies. Dario Coates and Katie Eldred as the young lovers brilliantly depict their struggle to find their own identity, frantically looking for a truth that can help explain the past.

This production grips throughout, and while being a truly enthralling history lesson, it is essentially a haunting, poignant, sublimely crafted and superbly acted piece of theatre.