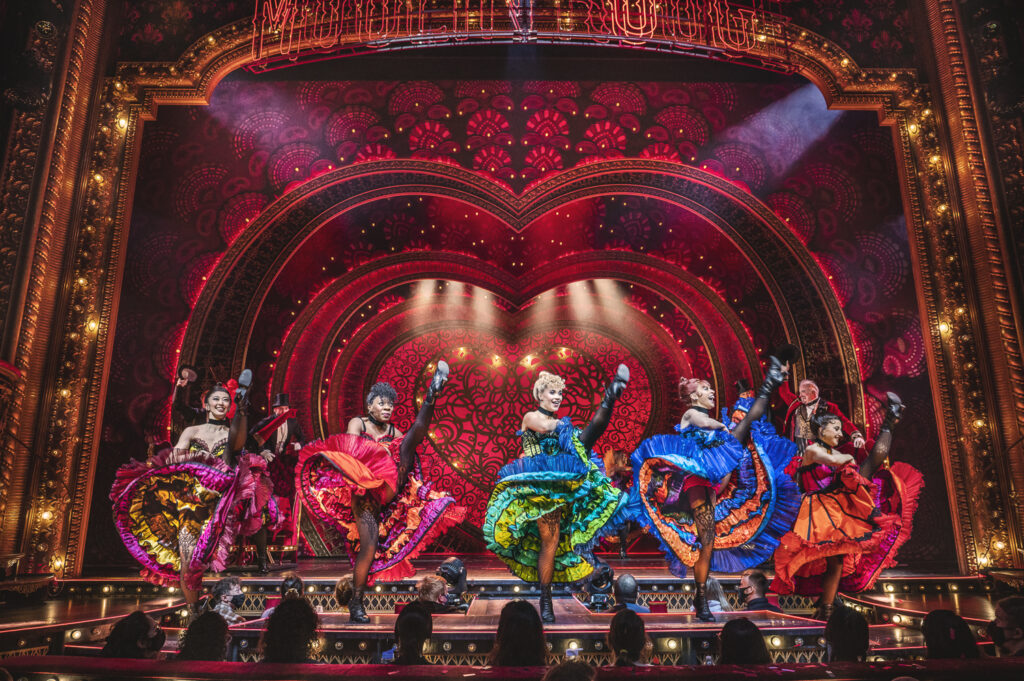 When Moulin Rouge was released in 2001 it put its very best foot forward with an absolute dream team of Baz Luhrmann, Craig Pearce, Craig Armstrong, Ewan McGregor, Nicole Kidman, Jim Broadbent, John Leguizamo, and Richard Roxburgh to name a few. For goodness sake, even Kylie Minogue featured for a second (“I’m a green fairy!”) Not only that, but it apparently took Luhrmann over two years to gain the rights to the most carefully curated track list, featuring some of the biggest songs of the century. So, with all that in mind, Moulin Rouge: The Musical faces a tremendous amount of pressure. How on earth could you make a version of a Baz Luhrmann production and make it better, even make it just as good?

Filing into the theatre, the staging already promises a lot, with tens of floor-to-ceiling light-encrusted ruby red hearts sitting nestled within one another; an enormous adorned elephant bedecks the royal box, and opposite, the iconic windmill spinning lazily. Emblazoned in bright lights across the front of the stage, ‘MOULIN ROUGE’. As the audience shuffles past one another, holding plastic cups of wine, taking off their giant winter coats and shoving them under their chairs, dancers move in seductive slow-motion across the stage and around the front rows, in encrusted velvet corsets and top hats, crescendoing with two low-key sword swallowers before its even begun. It’s all very alluring, and the first song, ‘Lady Marmalade’ is the perfect smutty number to introduce us properly, filthy-sexy and so much fun.

But as the play unfolds, unfortunately it doesn’t quite keep up, with some songs merely echoing the film’s outrageous performances, and others bizarrely saccharine or, quite frankly, just not good enough.

It’s a strange beast in that it doesn’t quite know what it is. On the one hand, Derek McLane’s gloriously over-the-top, no-holds-barred stage design, and Catherine Zuber’s saucy, sexy, sometimes lurid, sometimes lavish costumes are the stuff of the very highest production value. On the other hand, there’s something disturbingly panto about some of the performances, the leads feel a bit- dare I say it- Disney in their wholesome asexual chemistry, and the additional songs not included in the movie are presented like a sing-along; rather than being cleverly and carefully chosen and then moulded to suit the story’s palette, they seem to clash. In the second half, for example, the morning after Satine has had to break Christian’s heart and pretend she doesn’t love him because otherwise the Duke’s going to have him murdered; it’s a pretty tense and heavy moment. Christian starts singing Adele’s ‘Rolling in the Deep’ with all the melodrama of a fourteen-year-old Glee member, and the audience takes their cue and joins in! Not only are they clapping along, they’re bloody singing! At near on the saddest part of the whole story.

That’s not to say there aren’t flashes of flamboyant ecstasy: Clive Carter’s Harold Zidler, despite doing a sort of impression of Jim Broadbent’s performance, is delightfully sinister and scornful, and contributes a slightly different flavour to the complicated character.

The end of the Elephant Medley is pretty spectacular, Satine’s room spinning to reveal a starlit night sky, the Eiffel tower being rolled on by eight extra dancers, and quick sparkling costume changes for both leads as they climb the miniature landmark. Two aerialists spin elegantly from the ceiling as Satine and Christian sing the last high notes together, “How wonderful life is now you’re in the world”, and the chorus stares lovingly on. It’s just so ridiculously excessive, I love it.

I think this would make a really fun proper knees-up sing-along if that’s the direction they wanted to go in; a great night out with the girls, belting ‘Baby you’re a firework’ and ‘Single Ladies’.

Alternatively, it could do what it looks like it should and be properly debaucherous and depraved, and the subject handled with a lot more grit and seriousness. I don’t want to hear Satine saying “I can’t go back to the streets!” and Christian responding with a fatuous “Then come with me to the stars!” Dude, she’s talking about a life of prostitution and homelessness. What are you talking about??

Piccadilly Theatre until May 2022