“Anything can happen in this exuberant show”

Sh*t-faced Shakespeare’s Taming of the Shrew is a merry romp indeed. Every night one of the actors gets joyfully inebriated, and makes their way through the play as best they can, ably assisted by their fellow cast members and the audience. It’s delightful, bawdy, boozy and hilarious. A seventy minute adapted script is the basis of the show, but it’s more a framework that anything else. The sober actors try to keep things more or less on track, while going with the flow and having a lot of fun.

Tonight is was the turn of Petruchio to get sloshed. His drunkenness made the character endearing and charming, particularly when he announced that he’d love to marry Kate, but only on equal terms, and called out the play for being really sexist. This was a while after their wedding. Perhaps this is the best way to deal with this problematic play; just let everyone have fun with it. Bianca in particular had a lot more fun than usual – some of it very naughty indeed!

The cast were quick and amazingly adaptable, picking up on ways to play with and get the most fun out of the chaos produced by Petruchio not exactly sticking to the script. In fact, when he is deemed to have managed rather a lot of Shakespeare, he has to drink some more. There is cross dressing, a very large cod-piece, audience participation, a bare buttock or two, a slightly embarrassed horse and a party-like atmosphere to the whole thing.

You never know what will happen when Magnificent Bastard Productions stage a Sh*t-faced show. It’s different every night, a mixture of Shakespeare, clever improvisation and ridiculous shenanigans. It was entirely possible that Petruchio may have decided not to get married. He may even have run off with a different cast member. Anything can happen in this exuberant show. 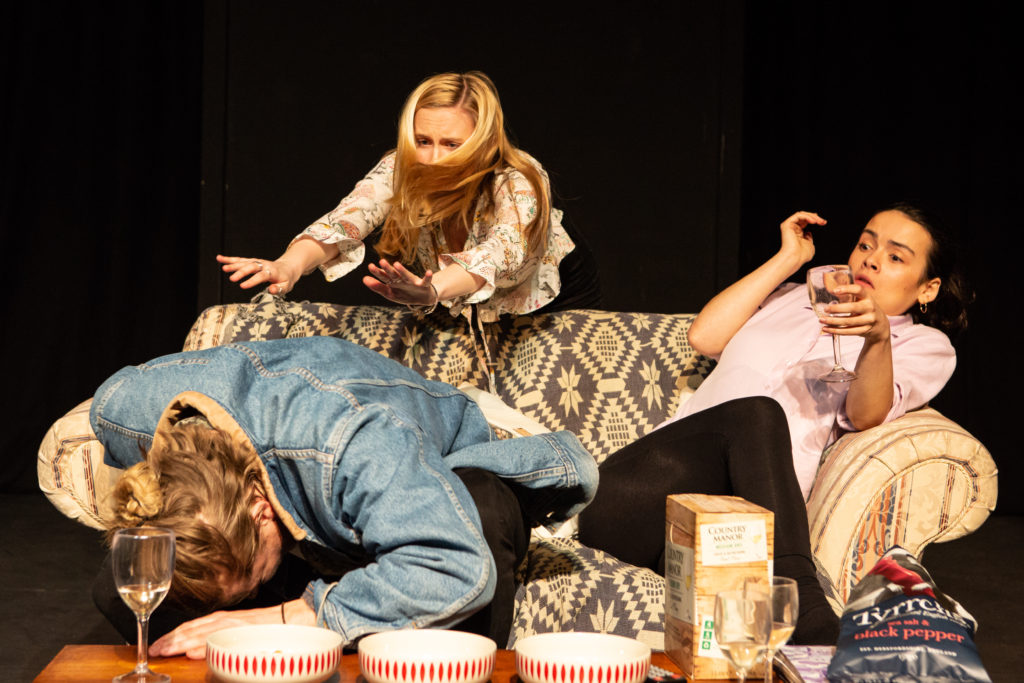 Pedantic pain-in-the-arse Lucy (Katherine Thomas – who also wrote the show) is ready to settle for a night in. Room-mate Gus (Calum Robshaw) has got other plans. He’s dating Rachael (Natasha Grace Hutt), and the pair aim to invite ‘man bun’ Caps (Jack Forsyth Noble) over to make the evening a double date and try to set Lucy up. Thomas’ writing debut is cynicism turned up to eleven but delivers its sour grapes with hilarious results.

There’s an interesting quirk Thomas has given to her character Lucy: a love for the television show Gogglebox. Sneering at people’s reactions and life choices is exactly what she spends the whole play doing. Even though she makes you laugh, Lucy is truly detestable. Thomas plays her like a completely joyless version of Chandler from Friends, barely cracking an honest smile throughout. It could have been the plays failing – after all, what’s the point of a comedy straight-man you can’t stand? But her heady levels of sarcasm are tethered by a strong and evenly matched supporting cast.

Thomas is the kind of writer actors wish for. All the cast get their good share of laughs in a play packed with very funny dialogue and well-timed comic moments. The pick of the crop being a game of charades that had us all belly laughing throughout. More confidence could have been placed on the actors and their delivery though, as there was a slight tendency to go a line too long on some jokes and spell out the gag.

Unfortunately, the design elements were noticeably bland and did nothing to make the large space of the Stockwell Playhouse feel domestic. A clothes horse, desk lamp and sofa appear to have been thrown on stage indiscriminately and said nothing of a shared living situation. More attention here would have made the threats of eviction in the play feel worth it.

Katherine Thomas shows a clever knack of finding unimportant social norms, unravelling them to nonsensical degrees and using it to frame her comedy and drama. The trick is not pushing it too far. I look forward to what she does next.